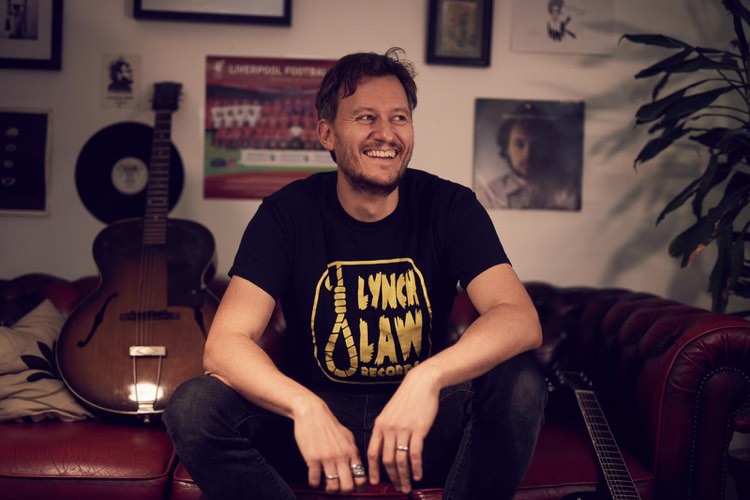 It was the great Frank Zappa who said: “Without deviation from the norm, progress is not possible."

Well, after the making of the album, Jonny Weathers - Dusted Radio, I’d say that is undoubtedly true.

Dusted Radio is in some ways is the result of an alignment of a number of stars. Some of the songs had been hanging around for a long time waiting for the right middle 8 or vocal line, or even the right band to deliver them honestly and with the chemistry needed to convince. Others are brand new and possibly more mature and direct in their composition, but then how should I know, I just write them. I guess I’m still just trying to write a good song.

The project started in late 2019 with myself Nathan Feddo and Matt Nixon going into Rooster Studios in Shepard’s Bush, West London and recording two of the tracks, with Lloyd Jukes engineering. Psycho (In an emergency) and How Long Until It’s Gone. They turned out well and I thought wouldn’t it be cool to do a split 4 track EP with Matt and Nathan and me on side A and Toshi JC Ogawa from the Professionals, Paul “Cookie” Cook (Sex Pistols) and me again on the B side. This was something that I’d wanted to do quite quickly. Mainly because earlier that year Cookie had introduced me to Duff McKagan (Guns n Roses). There were two surreal moments in this meeting for me. Firstly, I was sitting back stage after Duff’s gig at Islington Assembly Hall, eating pie and mash with him and Cookie. We’re chatting away about all things music and then Cookie tells Duff, while pointing in my direction “this guy is a great guitarist.”. To which Duff then says to me, “if he says that, then I know it’s true.” He then goes on to tell me how he had always compared other drummers to Cookie since he first saw him play with the Sex Pistols in the 70s. Then he said, after I told him I was planning to record, “if you need some bass on there, let me know, I’ll do it.” I remember saying to Cookie on the way home “we have to do this now!”. Anyway, Duff recording for us didn’t work out in the end as he was pretty tied up, but that’s cool, maybe next time. I suggested the EP idea to Moldy at Lynch Law Records and it seemed like a goer. It would nicely follow up my earlier release with Lynch Law, called Sonic Assault, also a 4 track EP, which also features Cookie on drums. So early in January 2020 I go in to see Ben McKone, engineer at Crosstown Studios, London with Cookie and Toshi and we record 2 more tracks, Always Watching You and Indian Rope Tricks. They turn out to be pretty good as well, so we leave it there and now it’s just down to me to record guitars and vocal overdubs for all four tracks at a later date. I had a lot of other commitments around that time, so the end of March was penned in for the final parts to be added with Henry White at Dental Records. Cookie had actually flown over to California in the meantime and got Phil Collen (Def Leppard) to lay down some guitars for me while he was there. Great! Should be out by June 2020 wohoo!

You know what happened next.....
Everything stopped.

It’s pointless hating a virus, but I still do. Bet you do as well. I’ll be honest, my heart wasn’t really in that bollocks Covid19 pandemic. It was shit.

So I had to wait a loonnng time to finish the tracks. This would have been quite frustrating and I might have given up altogether had I not had the suggestive comment from Moldy at the label, “an album would actually be more interesting for me anyway.” A positive spin was all I needed, on it went. I had a creative focus again. I wrote arranged and practiced like mad. The practice part was mainly due to the fact that the other lead guitarist so far on the album was Phil Collen (Def Leppard), so I knew I had to pull something special out of the bag guitar wise to even get near him. We actually have ended up with a duelling guitars track on there called, I Used To Have Possession. That was great fun for me as I grew up listening to Phil, and I was trying to keep up with him then as well, and I wrote the original version of that track when I was 17.

So, back to the Frank Zappa quote where we started. Everything became pretty shit almost overnight, lockdowns and toilet roll worshipping, this seemed to be the deviation from the norm shall we say. The world stopped progressing. It just paused. Music became something unattainable, certainly in a live and person to person sense. The unthinkable had happened to us all collectively at the same time. It was surreal. So progress in some way seemed more important than ever to me. To move against the grain and push on relentlessly was vital now in my mind (well I did have an ‘anarchist’ behind the drum kit after all). Everything did change beyond anything we’d ever experienced before, but this is where the real progress was made, Mr Zappa. I had over this time become friendly with Phil Collen, so I felt comfortable enough to ask him if he wanted to be involved in playing on other tracks for an album. He said “Absolutely!” He wasn’t able to tour with Def Leppard, so it was a good time to get him involved. Cookie was also forthcoming, as was Toshi, and the rest of the Professionals, Tom Spencer and Chris McCormack included, they were all really great! They had recorded a track I wrote, at Zak Starkey’s studio earlier in the year which was meant for their album, but I inherited it, which is great as that has now become Radio City, the opening track of Dusted Radio. Tom Spencer’s chugging guitar seemed the perfect way to start the assault after the ethereal synth intro. Their alternative version became the song Heartburn on their album SNAFU. I was also working on the SNAFU album with them at the time as well and I got to record with Zak Starkey’s Gibson Les Paul and again work with Phil Collen, but also Billy Duffy (The Cult) and Neil Ivison. It was amazing. That’s another story though. I also recruited a blues harp player called Simon Baker who I’d met at a jam session in La Rioja in Northern Spain a few years before, and Dave Draper who was to produce it (he ended up playing guitar on it as well). As soon as we could, we were recording. Me and my 9 piece shit hot rock band. It was actually a great time when I think about it.

The results of the recordings were nothing like I expected, it sounds like a real nostalgic futurism, in a way, like a modern film through a vintage lense. Like Blade Runner in a Rock n Roll context, to me anyway. That’s largely due to the brilliant production by Dave Draper, he gets what I’m about and captures it perfectly. I am proud of this album, both sonically and visually. The artwork is quite brilliant too. Olivier Fertel, from his home in Paris created a magnificent piece of sub pop art to capture and compliment the sound world.

No, it certainly isn’t what I expected, it’s better. Lockdown couldn’t stop this, It actually fuelled it. A real deviation from the norm. Progress was made Frank.